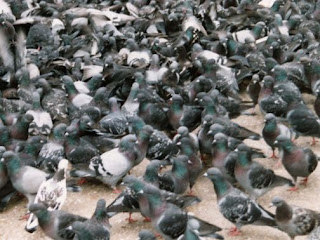 Abundant gleaners
Birds so gentle and noble
Not welcome at my feeder
Posted by hisheidi at 8:25 AM No comments: 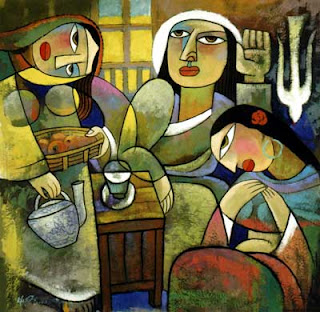 I had an entire post written on a Mary and Martha theme. It was all about the conflict of work vs. resting. I deleted it because I began to sense the motivation for writing it was askew and most importantly, while I was in the middle of editing it, Jesus said to me, "Why are you worried about all these silly things you are writing about when I love you so much?" And then, I started to cry.
Posted by hisheidi at 9:40 AM No comments: 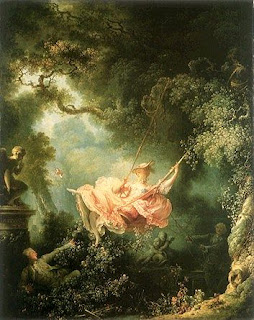 Some Thoughts on Painting

Fragonard, a French romantic painter, painted during the time of the licentiousness of the French courts. He particularly chose the excess of that regime as his subject. I am drawn to his art because it is more than what is depicted. Fragonard's art often shows the subject in all the pomp and circumstance of his or her wealth involved in some frivolous activity while the back ground of sky and cloud depicts doom. A perfect example is the painting, The Swing.

The Swing portrays court members in the garden with a lady painted in the innocence and ignorance of pink seated in her swing as she is pushed by her priest lover, while another man stares up her skirts. In the background ominous gray clouds are forming The trio is oblivious in their happy naughtiness unaware of the storm that is coming...the French Revolution. Fragonard had a good sense of irony.

I love the way art perfectly expresses realities that we in our own lives find hard to admit. We all distract ourselves from reality and focus on frivolity....or even scarier some noble cause. And the storm of of truth, the revolution of reality is forming.
Posted by hisheidi at 8:40 AM No comments: 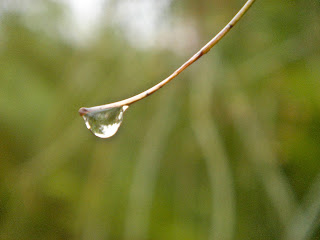 Long time no blog. I have a moment to spare and some random thoughts.

I am uneasy with the flow of life at present. I feel there is a great deal of activity and little purpose. I keep thinking of the biblical question, "Why do you spend money on what is not bread?" I am really questioning my appetite.

We do put a great deal of energy into our perceived goals, but I wonder if in the end they will really count for what really counts in life. I ask myself is this worth it? I suppose that answer will come in time.

We have a Cooper's hawk preying at our bird feeder. Last week it got a dove. All but a foot was left of the poor thing. After its meal, the hawk sat on the birdbath with its crop engorged until it emptied its bowels and flew away. I stared at it with binoculars and was awed at how beautiful it was. My initial response was to stop feeding the doves and sparrows, but I know I won't.

There is a mom at my daughter's ballet school who is unbearable. She is the stage mother from hell. Unfortunately, Bronwyn was affected by her jealousy recently. It is sort of like the Cooper's hawk situation....but the mother is not beautiful.

There also is another mom who is a backstabber. I got to experience her blade and again Bronwyn was affected.

I got my clinical assignment recently. I will be working in the newborn and level II nursery. I am really looking forward to it. Postpartum floors are happy places. When I was in chemo, I craved holding a newborn baby all the time to help with the nausea and despair. Now I will get that opportunity. They smell so wonderful.


I feel very far from God. I think it is all the activity.

That's all
Posted by hisheidi at 10:14 AM No comments: 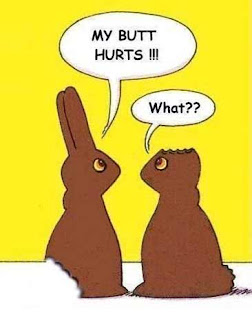 Communication is hard.
Posted by hisheidi at 5:19 PM No comments: 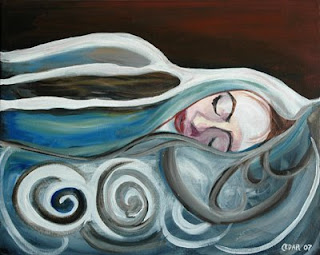 Life is cyclical. There is no denying it. If you read this, you are in a cycle. Whether at a cellular, psychological, spiritual, financial or circadian level, you are somewhere within a cycle.

Cycles for the most part come in stages. Stages of cycles are not equal. Though all are critical, some are just more pleasant than others. Take the cycle of a butterfly for instance. Caterpillering around, eating yourself silly is pretty good, but come on, flying around, being beautiful, pollinating, living on sugar water through a straw seems to be the better part of the process....or is it? I guess it is just the way you perceive it. And then, well, there is the cocoon stage.

The cocoon stage is not too attractive and from the action point of view, pretty darn boring, but it is probably the most critical and interesting part of the cycle. The reason I say this is because nothing and everything is going on----the paradox of the cocoon so to speak. I love this. For me the chrysalis is one of the greatest parables.

The cocoon is where the one thing (caterpillar-- etc,) becomes cut off from its former ways and nature. It blankets itself (it has no choice really, unless some other process interfers) from "caterpillarness" to engage in a pretty radical and who knows possibly violent transformation. It is a kind of miracle if you are into that sort of thing. Yet, while becoming "other," something of the former remains. That's pretty cool.

I have always wondered what it was like inside a cocoon. Does it hurt to become a butterfly? Does the inbetween know that it is changing? Is it conscious of anything? Maybe it actually dies a kind of insect death. No. I don't think so...it just evolves while NO ONE is looking. I could be wrong, scientists like to do that sort of thing, watch and take it all apart. I recently watched a baby show with Bronwyn on how modern sonography can really provide an amazingly clear photo of a baby doing some pretty fancy transforming in the womb. Nevertheless, metamorphasis for the most part, is an isolated affair, even if there is the occasional voyeur.

What comes out of the cocoon is fairly fragile however. Cocoon armor, while cramped, is awfully protective. Yes it is something new and beautifu,l but elusive, fragile and full of new caterpillars.......hmmm??... ....cycles.

Something of the human soul can be compared to, though not perfectly, a butterfly cycle, but I won't go in to that. I just know, that is, in my analogy world, that for a human soul, cocooning has to be hard because it involves immobilization, undistracted confinement, strangeness and maybe even violence. What changes, dissolves, expands?? Does the crawling ego become absorbed by a winged consciousness that is fragile but purposeful. Whatever the stages, one MUST become another and the same. If not......no more caterpillars. There is mystery and miracle in that.
Posted by hisheidi at 9:50 AM No comments: 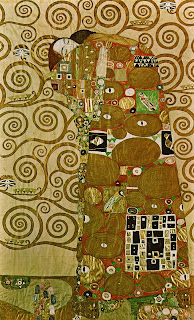 A Time to Embrace

I want to get back to blogging, but I am mired in being overly self-conscious about my post topics, inertia, time constraints etc. Facebook is a bit too superficial and its tentacles spread too far and doesn't seem to be the place for real thoughts...I could be wrong.

I have sort of been re inspired to blog by an unlikely source....I barely know the person. I really enjoy her ease at the blog. No torment, not too opinionated and yet so thoughtful. Maybe I could re-dip my toe.

What to post is the question as my last one considered a heavy passage in my life. Though I still wrestle with all the issues of that blog, I am looking at it from another perspective...... no less challenging. So where do I start? Well, I think I will start with an inspiration which comes with a little irony.

A Facebook friend was participating in one of those chain type things which I should probably have resisted -------but I didnt. The post directed that you pick up a random book nearest to you, choose a particular page and sentence and then post it----seemed fun. Well, my sentence came from a book titled, The Heart of Henri Nouwen and the random sentence was: Today I can no longer say that, and my question has become: "How am I going to use the few years left to me? Wow!

Still being in the raw times of cancer-survival- world, those words fall heavy on me. Not to mention the ouji board temptation to succumb to the prophecy of their message. But really, who knows how long anyone has to live?

According to Henri Nouwen, time is not a measure of the years we have and anxiously cling to, but an opportunity to embrace ( or not embrace) God's love offered to us from eternity to eternity. I am drawn to this and it settles on my soul pretty well. How does that work though--- especially in the light of how hard it is too embrace God when it feels like He is not hugging back? What does it look like? Instead of seeing my life as time--- (this by the way becomes a huge thing when you have been doing the cancer dance)---see it as the opportunity to embrace that which is greater than myself.

Yes, that is a good thing....except for the fact that I'm a terrible hugger. This I have been told. My anemic hug has been labeled the "Heidi" hug. That bothers me. Perhaps I have embraced God the way I have embraced people. Who knows. Whether I get a few or many I don't know, but I guess this is the time to begin embracing......... darn that Facebook....
Posted by hisheidi at 11:45 AM 2 comments:
Older Posts Home
Subscribe to: Posts (Atom)